Letting the Data Speak for Itself: The Impact of Business Sector Partnerships on Children’s Health | Alliance for a Healthier Generation Skip to main content
May 5, 2017

Letting the Data Speak for Itself: The Impact of Business Sector Partnerships on Children’s Health

This post was written by Dr. Howell Wechsler, CEO of Alliance for a Healthier Generation

In an era of “fake news” and “alternative facts,” it’s become increasingly difficult to separate our politics from our opinions. But data still matter, perhaps now more than ever.

Data tell us what’s happening and what’s really making a difference. During my 18 years at the CDC and my four years as CEO of the Alliance for a Healthier Generation, I’ve used numbers to shine the spotlight on critical public health problems and guide the development of programs and policies that have improved the health of children across the country. And I’ve changed my mind on any number of issues when the data we uncovered was not consistent with my prior beliefs.

One of those issues was engaging the business sector in efforts to improve the health of children. When I was a CDC public health scientist, I was highly skeptical of the agreement that Healthier Generation signed with the American Beverage Association and the nation’s top beverage companies in 2004 to get the companies to comply with voluntary school nutrition standards. I thought the companies were taking advantage of this upstart non-profit organization. And then the data came out — in a beautifully designed study published in the American Journal of Public Health no less. The agreement, of which I was just one of many skeptics in the public health community, led to a 90% decrease in beverage calories shipped to schools. It is now rightfully seen as one of the most significant accomplishments to date in the struggle against child obesity.

The data convinced me that corporations can contribute mightily to powerful solutions that drive positive change for our kids. The beverage agreement was the first of a number of important agreements that Healthier Generation has negotiated with the private sector to create healthier environments for our nation’s children. I could write a lot of words about the powerful impact these agreements have had on children and families, but nothing tells the story better than numbers. 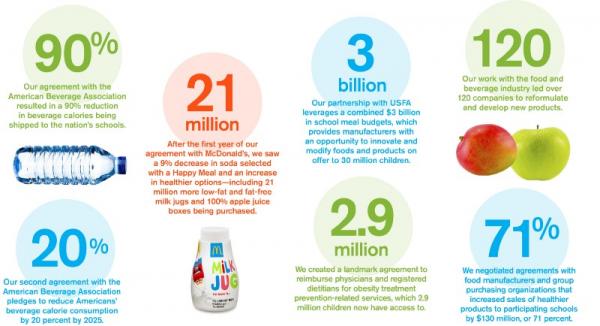 It’s no coincidence that following our agreement with McDonald’s, Wendy’s, Burger King, Dairy Queen, Applebee’s, and Jack in the Box followed suit and removed soda as an option on their kids’ meal menus. These companies see which way the wind is blowing.

This level of impact does not happen on its own. We ensure our partnerships are based on science, defined by clear metrics, and verified through independent data collection and analysis. And when companies commit to us, we commit to them. We provide expert advice, consulting, analysis and marketing as they launch initiatives that match our national health goals. Though we welcome everyone to the table, we don’t accept funds from entities with which we are negotiating solutions.

The data are clear, and the numbers point to one powerful conclusion: data-driven rigorous partnerships between the non-profit and corporate sectors can have a profoundly positive impact on child health. And even in today’s divisive political climate, we should all still agree that the future of our country is only as healthy as the children who will inherit it.