Indiana | Alliance for a Healthier Generation Skip to main content

Indiana residents are affectionately called Hoosiers, a term that harkens back to the state’s farming or “country” roots. But today, Indiana is known for much more than its farmland. It is home to cultural attractions such as museums, expansive state parks and even the Indianapolis 500, which annually draws huge crowds to the state’s capital city.

But aside from all that the state has to offer, its residents face a distressing problem: Nearly one-third of children are overweight or obese, putting them at risk for serious health problems.

Our Work in Indiana

In Indiana, we’re making it easier for kids to develop healthy habits.

More than 580 schools serving over 347,000 students across the state have joined Healthier Generation’s Healthy Schools Program, creating healthier school environments for children to thrive. Since 2007, 21 Indiana schools have been recognized with National Healthy Schools Awards for their outstanding efforts.

We’ve also made it easier for more than 24,000 youth in 65 out-of-school time programs to eat right and move more through our Healthy Out-of-School Time Initiative.

Hear from school champions from just one of the many schools and districts we work with in Indiana: Metropolitan School District of Pike Township, enrolled in the Healthy Schools Program since 2014. 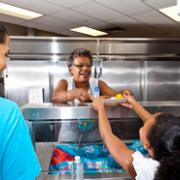 Principals like that Healthier Generation staff are very accessible and willing to talk to the individual school or district wellness committees. They also like being able to see what other schools have done to get ideas.

Contact us and make your contribution to children's health in Indiana.